It is a truism that the sort of mass shootings that other nations will put up with perhaps once ever are an accepted daily fact of life in the USA (we are a really large country and by and large, rich and important people tend not to be involved in the mass shootings), and hence, last weekends near simultaneous massacres at an El Paso, Texas Walmart (leaving 22 people dead) and in downtown Dayton, Ohio (leaving 9 people dead) come at an interesting time, since it is widely believed that the, ahem, President’s racist rhetoric inspired “stochastic terrorism,” and encouraged this particular violence (he would rather change the subject, of course.).
As I… er, my friend Donald J. Putin… hopes to tell everyone in the upcoming Donald J. Putin on American Exceptionalism, this country was hopelessly fucked up before Trump, although he of course is a symptom of it’s being fucked up. Indeed, as outrageous as the mass shooting at Parkland High School was (killing 17 people), it was certainly no less outrageous than the killing of 1st and 2nd graders at Sandy Hook elementary school (20 students and 6 teachers dead). Many suggest that some shooting or other will be a “turning point,” but if 20 dead 6 and 7 year olds doesn’t do it, nothing will. We are that gone as a country. I mean this sincerely. Seriously. Shootings of children. Of church, mosque and synagogue attendees. Of shoppers. Of people in work places. Just anywhere, WTF. Not even shooting members of Congress moves the needle. I swear, until someone shoots up a tony country club or a Fortune 500 board meeting (i.e., the only people who matter in this country, the very people likely to have security who could thwart such shootings) the needle just won’t move. It isn’t just the NRA (though it mostly is): it is baked into the cake of a culture of crapping on people, but telling the white people that they have the privilege of bad ass guns “if necessary,” you know– to stave off rampaging dark skinned people (fucking Senator Lindsey Graham said it this week in the context of why he owns a military assault rifle, though in his case, at least he had a fucking military career).
So where was I going? Oh yes. 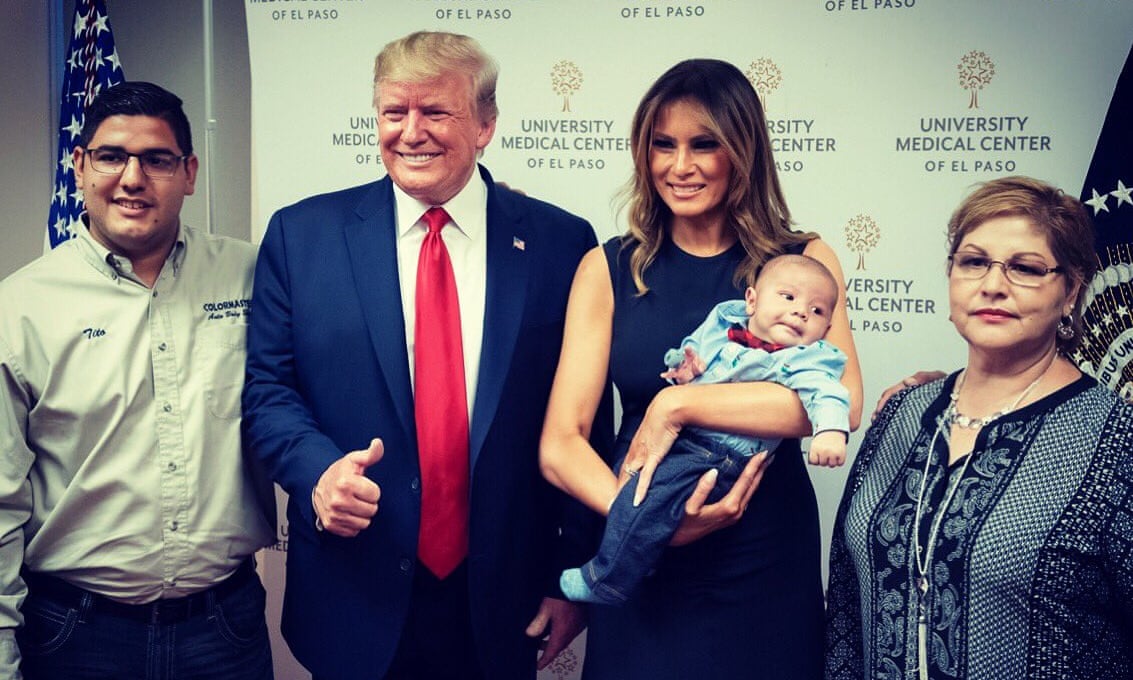 Take a good look at that picture, and then you can try to figure out why it is generating anger. Baby Paul there, held by a smiling Melania Trump, is an orphan now, his fingers broken in the shooting and both of his parents dying in the gunfire while covering his body to save him. Whether or not you believe that Donald Trump’s rhetoric of “invasion” and “infestation” led directly to their murder (and btw, Baby Paul’s father and uncle Tito, in the picture, at least according to Tito, support Trump and his policies), the question is the appropriateness of a triumphant smiling picture in these circumstances. Because it isn’t merely insensitive. (Shame on Melania too, btw, and shame on anyone who pities her, because she is totally down with the program).
My point? It’s inhuman. Uncle Tito has a half simile– he doesn’t really know wtf to do. But the President is supposedly making a condolence call. Can you imagine going to a wake or other occasion of mourning where both parents of a small child were suddenly killed, and being all smiles and thumbs up at such an occasion? It isn’t human. And this is my point: this “man” connects so seamlessly with about 2 in 5 Americans (that’s all– his approval seems to oscillate between the mid to high 30’s and the low to mid 40’s, never more, never less) because he is a mirror. This cohort of the USA population is sufficiently angry all the time to find that this… damaged person, who they see as everything they admire– a rich, arrogant, television star… represents them better than anyone in their memory (at least since the movie actor Ronald Reagan, from whom the “make America great again” line was stolen).
My point is simply that American elections have become referenda on incumbents, and turnout contests. In 2016, the incumbent Barack Obama was popular, but as with Bill Clinton in 2000, his popularity was not transferable. Hillary Clinton did turn out 3 million more voters, but in the stupid and atavistic “electoral college,” did not turn them out in the right places, and lost the election. She was not a particularly inspiring candidate, of course, and failed to even appear in two of the three critical Great Lakes states she unexpectedly lost (and as I can attest personally, from having worked in Philadelphia on election day in 2016) she did not have a particularly good “ground game” either. But the media allowed the election to become hijacked over issues of her corruption, allowing a likely Russian asset with a vast record of dubious financial transactions and other… crap…. into the White House.
Well, here we are. That isn’t the issue anymore. That he is a racist monster hellbent on spewing the kind of eliminationist rhetoric that often accompanies genocides, and he is doing this in a racially diverse country where too many of the 70% or so who are white people feel “threatened” by the dark people (and easily activated by hate speech)… this is the issue.
It is the only issue. And Dems taking each other on about what they voted on 40 years ago isn’t necessarily the best way to deal with this. Pointing out that there is a racist monster in the White House who has to be removed at all cost… that would be a pretty good pitch. Just speaking for me only.