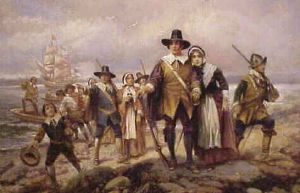 The hackneyed way of dealing with this holiday, declared to be the fourth Thursday in November in 1863 by President Abraham Lincoln, is for everyone concerned (especially school children) to recite what they are thankful for. In my case, it is even more hopelessly hackneyed, as, despite the (macro) political ruminations you see played out here, I have no cognizable (micro) real complaints: I am certainly thankful for my wonderful family, my lovely home, and my most pleasant overall circumstances (including certainly good physical and mental (!) health, as rewarding and fulfilling employment as I have ever had, freedom from most material wants… and… freedom in general.)
Many people would then go forth into a recitation of how great it is to live in this wonderful and prosperous country, where we can all be free. Free… to irresponsibly despoil the environment, to discriminate against those from different tribes or creeds (if not annihilate them, whether here or abroad), to squander generations of accumulated wealth, moral authority, and goodwill so that we can be undisturbed on our Playstation 5.2 …
Ooops. I lost myself there. Lookit: we are in an amazing age where some nudnik in Brooklyn can tap out things on a keyboard and have somewhere between three and four hundred people a day, most of whom he has never met, all over the planet, tune in to read… where armed only with the power of this neo-medium, he can get some of the most interesting people in the world to talk to him about the most compelling issues, and then condense their thoughts into a format for the edification of those same three or four hundred people a day (more on occasion, when others, many of whom said nudnik still hasn’t met, find his blog dialog interesting enough to refer to in their own ethereal publications.)
Which is all… revolutionary. Certainly in speed and scope, although, we have to realize that the founders of this country, when plotting what ultimately became a revolution against the then-mightiest empire in the world, used quill-written notes and letters transmitted by horse or sailing ship… So… we can communicate faster, now. We have more access to information at light speed. And yet… what is the quality of that information? As digby frequently laments, our Washington press corps, which should be more sophisticated about telling us about the workings of our ever more complex governing mechanisms, choses instead to focus on the juvenile and puerile as if they were what mattered (the irony being, of course, that in the last election cycle, this focus led to what I believed to be the overplay of the Mark Foley scandal, which ended up resonating with key sectors of the electorate). Yes, there are now millions of these web-logs out there (though I read that still only around 10,000 or so are, like this one, actually read beyond the circle of family, friends, co-workers and acquaitances of the blogger)… as we get into information overload, what matters is not the speed or the quantity, but the quality.
I have lamented that, like television, which had the potential to be the greatest cultural and educational phenomenon ever, but devolved to instead give us Charlie’s Angels, Survivor! and The Bachelor, so the internet would disappoint as well. I feared it would devolve largely into distribution mechanisms for pornography, gambling, and heated debates among geeks as to whether Kirk or Picard was the cooler Enterprise captain (answer Kirk… obviously). And, frankly, I think that lament is still right: there is an awful lot of chaff out there. And I do mean awful.
But there is, thankfully, an awful lot of wheat as well… For one, you can start with the blogs on our side-bar (or in the Dog Run), written in many cases by people I am proud to call my friends, whether I have met them in the flesh or virtually, friends that I would not have met but for this revolutionary medium…
Ah. Something else to give thanks for.